Numbers are showing me that, consumers in Newfoundland and Labrador, will be looking at steady pricing for gasoline...for now and an increase coming on stove oils of 2.4 cents a litre.

Gasoline pricing may not be left unaffected for very long however...

The last week in the trading markets are starting to move pricing upwards again and, all areas of North America will be affected should trading conditions continue. After trading yesterday, gasoline spot pricing rose by 3.1 cents a litre and #2 oils rose by 7 cents a litre over the fix some two weeks ago.

Funny thing is that this is completely contrary to what was heard in the markets some couple of weeks previous. Most market traders were considering the fact that OPEC members continuously cheat on their own quotas and the reports showed that. Warmer weather in the US northeast also aided in good builds to heating oil inventories and a drop in jet fuel demand added to the downwards pressures on distillates.

Reports on the latest round of OPEC cuts are showing that the Saudi's are reigning in their production and the rest of OPEC membership will, most likely follow.

My guess is that refiners in North America are shortly going to bail out on distillate production, considering the lateness of the heating season, in favour of taking a chance on the gasoline market demand for the summer season. It's early to do that considering May month is three months away yet but, that's all the traders have to depend on right now.

Add to that, a predicted drop in overall refiner capacity and the ability" to keep up with ongoing demand pressures that will sap inventories and you have the recipe.That's partly reason why, in the coming weeks, the oil companies are going to be able to put the screws to us all again.

I won't even touch on those predetermined hurricane forecasts that they'll be trading on but, remember where you heard it first.

Look for increasing gasoline pricing again unless the consumer fights back, on a collective basis, by practising conservation measures.

Ya think that we'd learn our lesson on OPEC dependency, wouldn't you? 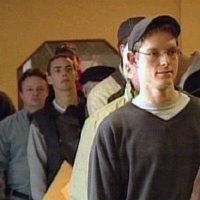 What is the purpose of a resource?
Gawd knows I am no favorite of the oil companies, but...
From the CBC archives comes this picture, taken at the Capital Hotel last October, 2006. The picture was taken during a job fair at the hotel.
Some 9000 people showed up looking for prospective employment in Alberta.
While Alberta enjoys having the problem of not enough people to help nurture its resources and help bring them to market, here the problem is the opposite-we have the resources, but not enough of an ability to realize what the purpose of those resources are.
We don't have the courage to sign a deal that means more than just to the provincial treasury.
The picture itself has to ask the question, if you live here in Newfoundland and Labrador, exactly what is the purpose of a resource?
If then, the purpose of a resource is to make things better in your own neck of the woods, then why can't the province get it right? If we can't USE a resource to put our own people to work, then, why do we have them?
The purpose of a resource is to help nurture your own people so they can create an environment where they can stay, have some kind of hope that they can put down roots, to carry out what we have been trying to do for years:
Survive!
If we are so hell-bent on doing what is right for the province, why can't we reach a consensus with those who are to develop those same resources to help us survive in this place?
I don't like the fact that someone can purport to be "doing the right thing" when I see line-ups of people looking for opportunity elsewhere from this land. I don't like the fact that our best resource-OUR PEOPLE- are being exported "raw" to places where they'll be a number and not a name.
It's here that the people of this land want to stay.
To you in the upper echelon I do have to say:
The purpose of a resource, is to keep your most important resource-your people-here.
Exactly how bad is the Hebron-Ben Nevis deal, that we haven't been shown the details of what has been negotiated for before talks broke off? How bad off does the government treasury have to be before the government realizes it has done irreparable damage to it's own people for which their resources have been meant for?
Does the government forget that, with out-migration comes a lack of youth? That in turn means an older population for which they'll be spending millions for homecare when they get older because their own children would have planted roots in a far away land years before?
Does the government understand the implications for which it has broken off negotiations?
Really!...
The words of a Stan Rogers song come to mind here:
"So, bid farewell to the eastern town you never more will see...
There's self respect and a steady check in this refinery.
You will miss the green and the woods and streams and the dust
will fill your nose.
But you'll be free, and just like me, an idiot I suppose..."
Now he's off to Fort McMurray to check on the kids...
I'm sure they're doing just fine.
Maybe they might have phoned you from the 403 or 780 area code already
to tell you so...
Posted by George at 10:36 PM 1 comment:

More thoughts on U.S energy needs
I was thinking again...
Getting to be a dangerous thing!
Yesterday, i posted a word or two on the story where george bush and the U.S Energy Department meeting with key officials of Natural Resources Canada.
The story, as CBC's Radio-Canada reported, is that the U.S is trying to get Canada to "step up" production of crude or bitumen, from the western oil sands projects, mostly in Alberta. What they are asking the Canadian government for is a fivefold increase in production from the oil sands fields. Not only are environmentalists worried, Canadians should be worried about becoming a US energy supplier before Canadians and their consumers are.
There are other underlying concerns here though, that Eastern Canadian producing provinces should be worried about, imparticularly Newfoundland and Labrador.
What I'm saying about that, is this...
Newfoundland and Labrador fought long and hard to attain offshore oil production, finally seeing first oil from the Hibernia project come to fruition in 1997. The project is now through its half-way point with another ten years of production left in it.
What we have also been left witness to is a break-off over negotiations of the Hebron-Ben Nevis oil project not far from Hibernia and a possible shut-down of the offshore oil industry as Newfoundland and Labradorians now know it.
Talks broke off when the premier of the province wanted "extras" like an equity stake in the project. The oil companies who discovered the resource, with no input of provincial investment in the project, have refused to grant those extra conditions.
Because there is now an impass and there is no hope of a future agreement under the Williams administration, it is very likely that Newfoundland and Labrador will not see the advent of another oil and gas project while the present administration remains in power.
What we possibly are going to lose is a heck of a lot of revenue to look after our seniors who will be left alone because Newfoundlanders and Labradorians will, again, head west to help Alberta produce oil "fivefold" for the United States.
Alberta is presently exporting some one million barrels of oil per day South of the Border and, with the likelihood of five million coming on-stream by 2015, we just might see the population of Newfoundland and Labrador become decimated by the outflux of workers and their families to western areas.
There's trouble ahead...
The question remains however, "what is the province's best resource that it should preserve for future generations?"...
The answer in this case, should be " To preserve it's most cherished resource-it's people-for itself."
If the western oil sands developments take place, then the world's next endangered species might very well be Newfoundland and Labradorians...
It's going to be a slow death...
Posted by George at 10:44 PM No comments: 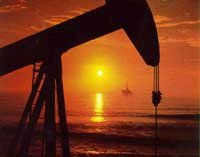 Hell no...
Canada beware!...George is coming!

According to CBC's Canad Now, George Bush's call for alternate supplies of crude oil other than what comes from the middle east, is going to be answered by Big Oil in Canada.

When George spoke to Congress last year, he told America and the politico's gathered there that America had to break its dependance on Middle East oil. According to the story, there was a "meeting of the minds" represented in part by Big Oil. The plan was a rapid, five-fold expansion of the oil production capability of Western Canada's tarsands.

Now, correct me if I'm wrong, but isn't oil covered under the North American Free Trade Agreement, or NAFTA for short?

If that is the case, Canada's resources of oil could be swallowed up by the mere fact that NAFTA calls for any exports from one country aren't allowed to be reduced. In other words, we have to maintain and increase production to meet American industry and consumer needs.

Think of that for a minute...

While Canada produces 2.7 million barrels a day, it ships some. Uncle Sam will be looking for an added 1.5 million barrels a day by the year 2015 and that doesn't include present or future demand under "normal circumstances". Add the rising number of drivers and industries and we have a recipe to drain our own resources before the United States explores some other areas it hasn't touched yet...

We just might have to "bend over backwards" for Sam rather than ourselves in a few years.

Posted by George at 7:46 PM No comments: 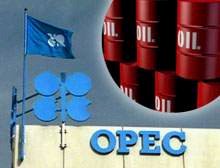 Wait for it...
Some oil company officials and NYMEX traders must be basting in their own juices right now. Over the last couple of weeks, we've been witness to oil dropping from record highs a short time ago, to todays $51 and change.
Poor oil companies!
Pooor OPEC!
Remember when the OPEC'ers used to ramble in the news about maintaining oil between $22 and $28 US a barrel?
I can't seem to find the record, or news report, that saw OPEC officially change their minds on the range they were comfortable with. It's too bad they're too comfortable with this one.
Any day now, before February sets in, you will be witness to a breaking business news story that OPEC will be holding an emergency meeting to discuss production cuts in addition to those already self-imposed.
What you'll be witness to is direct manipulation of the family budget-or is it-victim of?
Here is what we really have, and some might call me nuts...
Here is reason enough why Canada should have a policy of "us first" when it comes to Canada's production of crude resources. If a company is to produce Canadian resources and supply the consumer of this country, it should be Canadian law that Canadian consumer and business needs are met first before any exports take place, and refined before they are, at that!
Here is reason enough why Canada should have a green program to break our dependence on foreign, let alone domestic- sources of petroleum products.
Here is reason enough why the world should be straight-out saying "no" to OPEC...
If we had the sense, we'd all call a world boycott of OPEC petroleum products and start using our own.
Told you I was nuts!
Posted by George at 9:07 PM 1 comment: